At Last; The Marrow Mystery Revealed

So let me guide you through a marrow recipe. I used this:- 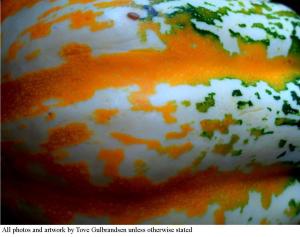 It isn’t a marrow.
I couldn’t find one anywhere. I had promised myself I would take one with me to Norway as a surprise.
There wasn’t one left in the whole of the allotments.

There was a marrow plant still growing there. 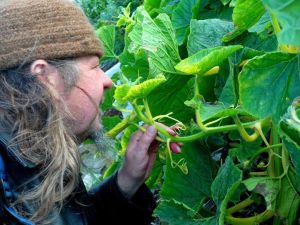 I am rushing ahead here however, because nobody knows what a marrow is or what to do with it. These two facts become true when you put them together. Well, not many know what to do with a marrow – the vegetable which has the potential to be the food of the gods – stay with me to find out how.
People might stuff one, but that is about it. 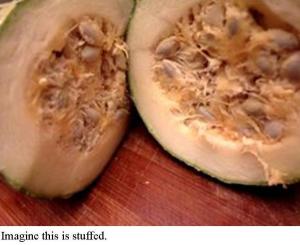 No one in Norway has heard of a marrow – extensive searches have been done by chief amateur researcher Tove.

Following the success of my recipe she just had to have some at home, but no. Norwegians (and possibly those of other nations) aren’t even that good at knowing what a squash is.

(I stole this pic)
There are squashes everywhere, (over here). 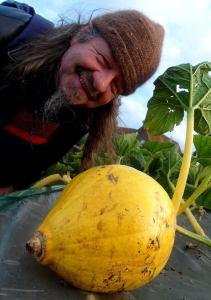 Squash is the generic name for these type of things, but if you ask for a courgette in Norway you get two in a bag labelled ‘Squash’. No. That’s not true, you would have to point, ‘There, those!’ ‘Those are them.’
‘Ah Squash!’
So, no butternut, no harlequin, no patty pan, barely a pumpkin and nary a marrow.

The wonder of the marrow must be introduced to the world! I took some seeds over, with detailed instructions on how to grow such a delicate plant; start early in a warm protected place, plant a few at a time, so you aren’t putting them all out at the same time, and wait till they are robust before they have to brave the elements.
But no, they all got planted at once.

Rule number one – only ever leave them outside after the last chance of frost, (in Bergen that’s around early July, just before the rainy season properly kicks in). Out they went. A post frost plant is a sorry sorry sight.

There was one seed left.

I popped it covertly in a pot, (in a tub with the pepper root which is a plant which requires a future expose in Britain), it quietly secretly grew.

Now is the time to roll in the big cameras and for the lights to flash – “Here, Ladies and Gentlemen, is the only marrow plant in the whole of Norway…”

As much excitement as there was about this blooming monster plant I had a private worry. As the only one there it wouldn’t be pollinated. I had another secret, an illicit import. Two flowers donated by an allotmenter in a disposable coffee cup. Ooooo the excitement – I unpacked; I unpacked a cup fill of slop, brown slop. We fed it to the Bergenesque flower by droplet.

Despite the hope there might be a miracle and it stays sunny right through October most of our hopes are for the future.

The plan is to plant them in stages and introduce them to the veranda gradually. The home plan.
The rest of the plan is to fill the whole of Norway with big beautiful marrows.

We shall start with two magical places. Organic seeds will be donated to Otternes Farm and to organic garden centre Sogn Jord – og Hagebruksskule (www.sjh.no).

So.
Let’s get cooking.
I have two recipes for you. The glorious (afore mentioned food of the gods) marrow pancakes. Plus my famed dish from Gudvangen Viking Valley, and from even further back in time, Neolithic Cave Bread.

Pancakes – Start with your squash – I couldn’t get a marrow.

So I got a harlequin squash.

I said I got a harlequin squash.

Yes, I said I got a harlequin.

I saved the seeds.

Right: Littleish lumps, (the ones in the frying pan picture below are a touch too big), drop them in boiling (possibly salted) water. Make sure they are well cooked.
Drain well.

(That pic is actually marrow btw)
Now make the batter.
Here is the gung-ho method…

[Again this is actually marrow and just the right size btw btw]
Big bowl, bit of salt, bit of pepper, chuck in flour (my mum says self-raising flour is lighter but I say it is for wimps), bang in a bit more, a couple of eggs and a tiny bit of baking powder if you have it.
Mix with a splosh of water (mum says some people add a bit of milk too). It needs to be thick, creamy and able to run.

Alright, you want to add finely chopped onion? Well, OK, but not very much…

Right have you got your pan hot yet!
Just a little oil, well swirled.
Mix the cooked marrow with the batter and drop in small amounts. Remember to turn them!

Stop, you have cooked them at the wrong time. They are not a meal. They are a surprise. Sneak off, cook a batch. Pop them on little plates. Now then I strongly recommend; heavy on the salt.
No, a bit more than that.
Go through and stick a plate on each lap. They will look horrified.
Leave immediately!
Get in that kitchen and cook another batch.
Be assured, they will want them.
And more.
And will come back for even more.

Now.
We go hurtling back in time – for – Neolithic Cave Bread.
Here are ones I made at home (in Bergen).

Really they should be done on an open fire. On a hot stone or slate.
Whenever I start cooking them in Gudvangen I am dishing them up all night.

Once you have learnt farming techniques, harvested grain and milled it, (here’s my attempt), you will want to make this.
(or just pop to a shop)

Here’s the secret – Bang it all in; veg, berries, meats, dairy products and an ostrich egg.
Here is the Bergen kitchen version.

This is some of what I used.
(It would be better with Elk and Fenalår.)

Chop that veg n stuff (and any cooked meat).

Simmer the bacon and garlic in bits.

Get it in your batter (this time feel free to be heavy on the eggs and cream and experiment with flour types).

Serve.
(At Gudvangen I used 44 different ingredients and people at around twenty tents tried a bit)

This is a marrow.

And this is the food of the Gods. 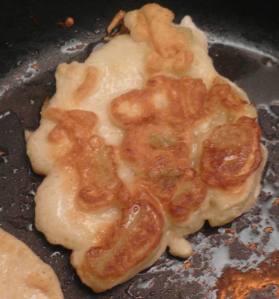 See also my other food related blogs – one – two

For for chat and interest – Sparkling Words

(read the blog from the very beginning)

7 thoughts on “Squash in a Recipe Adrian, Add a Dash of Mystery, then Feed Vikings”

Join 273 other followers
Follow Adrian Spendlow The Blog on WordPress.com