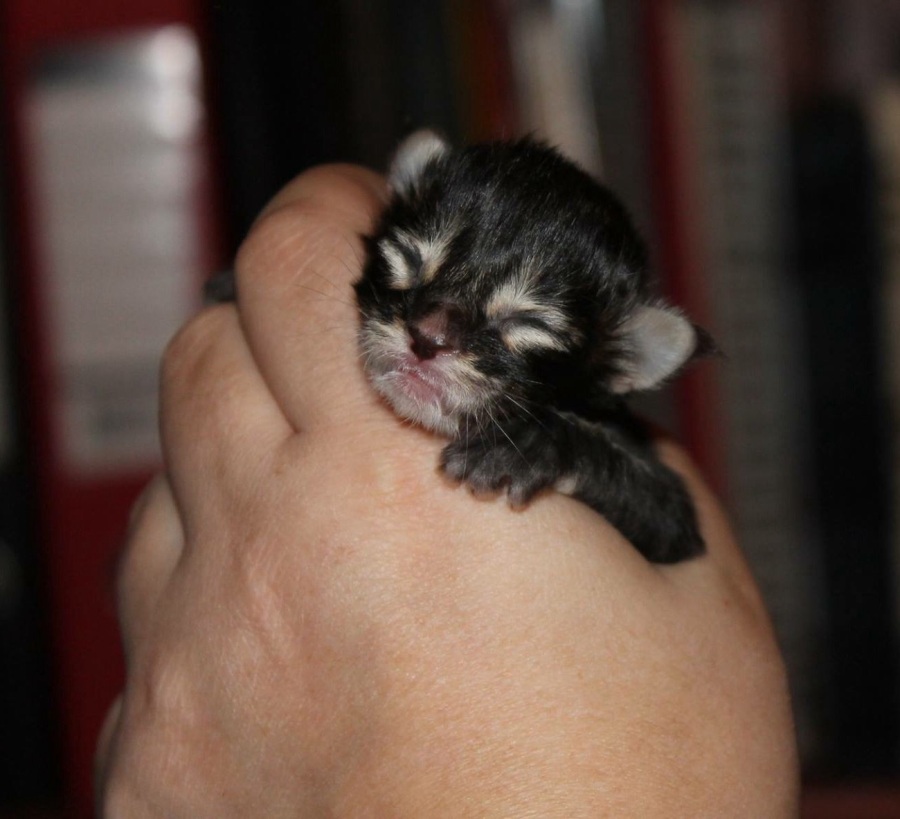 I had broken my journey twice.

Firstly in a drawer.

It was slightly bigger than that, there was room for my suitcase next to the bed.

I enjoyed my stay in the airport hotel though and while there I received an invitation to sleep in a room with big cats. They were not quite as big as I feared they would be, but when they tried to force the door open, (to get away from me!), it sounded like a very large person shoulder charging  it.

They were Maine Coon cats…

Here is the Queen. Mum to be…

She had a very lumpy stomach. The kittens were due in a week, there was something about the way she mewed when her tummy was stroked that made me think it would be sooner.

My prediction was right, they were here within twenty four hours.

Dad isn’t as big as the example above just yet. He is more like this…

He is not the brightest of buttons in the jar bless him but he is a metre long though and quite beautiful.

In came the message, ‘Could I look out for Norwegian art?’ The plan being that my artist friend was looking for inspiration and a new direction.

The art was there all around me.

Figures, paintings, then chest after chest after Teina (probably spelt wrong, but a wooden Norwegian lunchbox) full of amazing trinkets and keepsakes; Viking or from long ago in the family.

i particularly liked this urn…

It it was made all in one piece and yet the rings are not attached; ingenious.

A sculptor I admired was Leif Gjerme. Then when I left Bergen and headed to Fjordtell, Gudvangen I discovered that it was this artist who was on the team who designed the marble…

But more on Gudvangen later, back to the cats, or rather, their owner.

I heard of a love of the sea. How as a child she used to disappear off to her special place; a sheltered crevice in the rock that looked down on the sea below. She would often sit there for hours and no one knew where she was.

When I got here I heard that the family home, or rather, a friends holiday home she visited, had become available and she had phoned me to say she was packing up the cats and moving there.

The magical crevice is just along the island.

Another dream come true that I have witnessed. Tru deg meg nä.

So I very much look forward to getting a bus to the ferry and visiting that Island.

The family home has stories aplenty, I can only give you a taster here.

On a farm by the ocean it may be nearer to here by sea than by bus. Quite a journey though, and it was quite a journey to Bergen when grandfather needed an engagement ring.

This is where I heard that when we get out Viking ship at Gudvangen it will need a modern engine (that or all the tourists will have to row) as sailing the fjords is a dangerous business.

The journey to Bergen was uneventful, and most of the sail back was too. The little fishing skip sailed perfectly, until it got within the walls. With those steep sides beware the south easterlies. The winds come on you strangely and suddenly. He lost her.

He very nearly lost himself. He only just made it to the shore. His family had almost given up on him, it took days in sodden clothing to walk the rugged coastline.

But, but, but, did he still have the engagement ring!

It all ended happily ever after.

It ended happilly for a relative of hers even though they had spent two years in a prison of war camp.

A radio was found and he took the blame. When he returned after two years hard labour he wrote an article. It started, ‘We hear much in the way of sad reports of the war. Let me report something happy. I made many friends. We endured terrible hardships but we stuck together through it all.’

Another prisoner was a Russian in a different prison camp. When he escaped he was kept hidden in the farm for three months. When there were rumours his whereabouts might be reported he decided to try for home. They sailed him as far north as they dare then they left him to it.

The family never heard how he faired.

One of the family was wanted too. When the occupying forces came for him he was gone. He was in England but his fishing boat was adrift and his family were mourning his drowning.

And so to Gudvangen in Aurland. The area receives a million visitors a year; you wouldn’t think so now at minus ten with the fjord frozen.

That doesn’t stop the ships. I talked to Sigrun, captain of one of the ships. There are still regular runs and tourists coming through.

Those million or more come through here, but most are here in the warmer weather. It was minus eleven when I got off the bus, it wasn’t so bad. It feels colder in Britain when it is about zero, because it is wet and windy. Here all the moisture is frozen out of the air.

When Georg opened the door I called out, “I’m home!” I am with my cheiftain.

The presents for Angela were unpacked; Pledge and Pantene Pro. When you are living away from your home country there are things you miss.

For the Polish guys near me in York it is pickled mushrooms. It is polish with a small p here. I suggested that each of us who visit have a small drawer, not like the one I slept in at Gatwick, but to leave clothes behind in.

Don over in Osterøy supplies such drawers, so his visitors have a lighter case next time they visit. Then they have more room for pork pies!

If you were a Viking in the old land of Northumbria it would be reindeer meat you would be wishing for.

Here in Aurland there were many. Enough to make it a rich area; a rich area with a king. Until he chose the wrong side in a civil war and was strung up.

Long ago this land was ruled by one woman, and her son would go to war for her.

I am reminded of Bjorgvin Marknad where I do storywalks.

The museum there have placed an information display near the site of the boathouse. This was a place of warriors , long before Lindesfarne.

We are talking armies not raiding parties and we know this to be so because of the vast industry which has been uncovered.

To supply armies you need whole areas of blacksmiths, raw materials storage and much much more.

Way back when, there were armies leaving from Gudvangen area. So somewhere in the area is evidence of all this; barracks, furnaces, food stores. Somewhere.

This is my cheiftains sword; not a common type it was made for him so me years ago.

One discovery I know of is just up the road. When a houses as being rebuilt a body was found. A cheiftain. He, had the same type of sword.

Sigrun the sea captain talked of the Vikings in Britain and how I may be a descendant. I have never dared find out about my ancestry in case I am not Hiberno-Norse. What if I were Norman for instance! Sigrun said that would make me Viking too.

Ragnar left followers behind him and so did Ganger Hrolfr, so when Guillaume Le Batard conquered England he brought their descendants (The Normans) with him.

Harold Hardrider wrote to Guillaume (William) offering 60,000 ships. It has been seen as a boast. I hear though that it was warmer here then; Scandinavia was more fertile, there was a higher population. When you add into the mix the warrior fjords we knew of with their industrial complexes perhaps he could muster such a fleet.

Sigrun tells me that when a Norwegian visited Sicily when it was in the hands of the Normans they proclaimed him king.

They still had a Scandinavian identity, (or Viking even), they felt they belonged to here.

it is a bit liked the pork pies pies or the Pantene Pro.

There are more Norwegians in America than there are in Norway.

I am told that if everyone in America who felt themselves to be of Irish descent were to return to the homeland at the same time Ireland would sink.

Me? I am Hiberno-Norse settled in Jorvik in my heart and let that be an end to it.

It was at this point I asked the whereabouts of Sigrun’s ship. “Out there” came the reply. I looked out of the large windows of Fjordtell at the length of the fjord, it was all ice.

I had chatted with the captain on a fateful day, he was watching out for the ship on a maiden voyage. The ship had been this way many many times, but he had been training a new captain  and this was his first time alone.

My cheiftain and I haven  dream – a tour as Vikings: The Cheiftain and his Skald. A mix of the ways of the Vikings and their tales.

There is another dream. Where we hold our annual market (festival) in July in Gudvangen, there will be a Vikingby – a Viking town!

It is starting to happen already.

For this we will need a ship.

There are teams out there who can build them.

So it is possible.

What type of ship? A fleet? Yes, but, one must start somewhere.

It will have to have an engine as an option. It is very dangerous to sail within the walls of the fjord, as we leant fron Nina’s grandfather earlier, and not all tourists will be willing to row!

Just ask the guy in the shop about those South easterlies, that come in down off the wall and take huge picnic tables back up the other side with them.

A merchant ship is where a town would start. I disagreed. A fishing boat is smaller and brings a quicker result. The skills learnt in generations of fishing the fjords is what gave the Vikings the ability to go further once ship building techniques progressed.

“It is great to be a fisherman”

He is renowned for his slave trading company and is very entertaining.

He told me of his dream, and I passed it along; to fish the Sognefjord and bring the catch ashore and entertain the crowds while preparing, wrapping and selling the fish.

We may even cook it on the spot and serve it too.

“I too have an inheritance,” I hear. An interesting thing to be left; a huge pile of fishing nets.

Holger’s dream is about to come true. This July at Gudvagen Market.

“Not only that,I will go with him the first time and show him my secret fishing spot.”

“I told myself I would never tell anyone of my secret places, but, I will tell Holger.”

“It will be most interesting to see.”

Oh my god there’s a moose!

Look at it go!

It’s on the roof!

It’s on the bloody roof!

Look. Look. It is. It’s on the roof for gods sakes.

6 thoughts on “24 Hours in Gudvangen – plus Dangerous Moose Sighting”