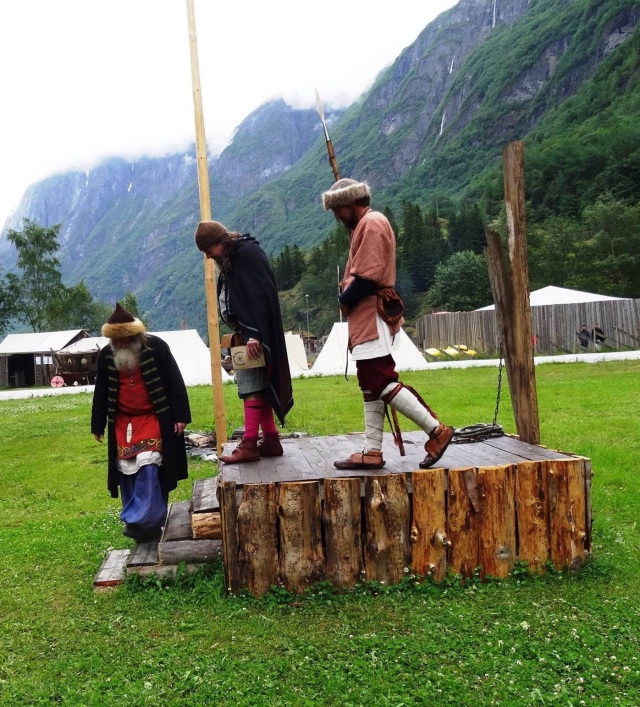 These are the Viking Experiences which led to the creation of Viking Comics Inc.

The recent Viking-related experiences of Adrian Spendlow and team member Chloë Anderson…
As Personal Skald to the Chieftain for Viking Valley, Gudvangen in Norway I am known for multi-national stories with participants speaking in as many as twenty languages. Storytelling courses, including at Lygra and Gudvangen markets are always an uplifting experience and I have performed at several Scandinavian events for Vikings, tourists and children. Story circles for children and young adults usually also draw out the child within the adult too.
I was recently very honoured to be tour guide for a week in York for students of the famous Seljord Folkehøgskule and am often asked to coordinate visits.
My opening speech for Gudvangen Market was filmed for Norwegian TV, and at Njardar Vikinglag’s Jolablot I did a story presentation for Belgian TV. As part of our campaign to win the right to build a Viking town I was portrayed across all Norwegian media, I also hosted Viking Rock Festival.
My double CD Andvari’s Gold is for sale on jelldragon.com the foremost online shopping site for Vikings, I also narrated Jorvik: York and the Vikings CD as part of the Spendlow’s York history series, which is also for sale on jelldragon.com
I am very proud to be a member of Njardar Vikinglag, Bjørgvin Vikinglag and an honorary member of the University of York Medieval Society’s Vanaheim Vikings group.
As a full-time storyteller, actor and poet I frequently working to commission (See general CV in links), as a result I have worked as poet in residence for many places including the Jorvik Viking centre.
The York Museum Trust, the York Archaeological Trust and the Jorvik Group for such as the Jorvik Viking Centre, Barley Hall and the Jorvik Viking Festival are among the many establishments that often use my skills.
Recent invitations include Borre Market and the thousandth anniversary of the gathering at Sarpsborg, and to create dramatised stories involving the audience which then lead into staged battles by a trained crew. I was surprised while compiling this to see just how widely travelled and how lucky to be part of the Viking world.
As a blogger I frequently write on the topics of Vikings, History, Storytelling, Poetry and even Viking cooking. As part of my blog I set up Viking Comics Inc. with Chloë Anderson and our first presentation features the work of some 18 artists; The Hammer Flies was very well received. This came about following a Jorvik Group commission which involved presenting Viking stories in the form of Comic book heroes: an especially written Viking Comic book display and the children’s resultant story formed a comic book display throughout the Jorvik Viking Festival venue.
As project manager for community work I have worked many times with Chloë Anderson mixing music, drama, storytelling, dance, reminiscence, on-screen presentations and publications. We recently created a ‘Spendlow’s TV’ series for sale as a download presentation. Chloë Anderson and I are currently working on a panoramic story and image download which will be available online this year based on the themes of a boat burial, Rolo in France, the different views of Viking afterlife, stories for the Viking world and the Ragnar clan in Valhalla. We are currently in discussion to create walks around fjords where you add to the story and accompanying arts as you go.
Our next Viking Comics Inc. will be a Graphic Novel presentation on the theme of The Horned God and the Wild Hunt. The theme for this and the draft script form the basis of our presentation to Follow The Vikings.

Back to the proposal

4 thoughts on “Living the Viking way”