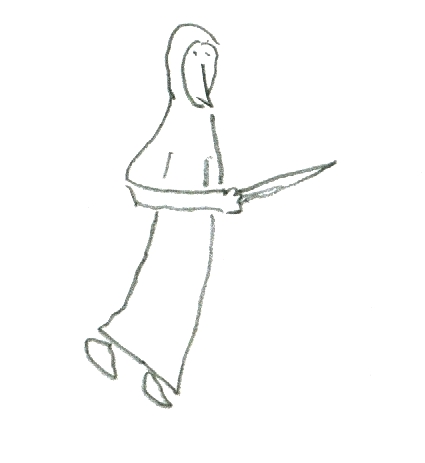 Introduction to the Discworld of Terry Pratchett. What was I doing! My beloved friends ‘We Are Theatre’ invited me to audition for their forthcoming production of Maskerade (the play of the book by Terry) and here I am writing Fan Fiction!!!!!!

Let’s not go there.

I am a big fan though. When I was asked to audition (and quietly knew I would be in there somewhere) I felt a synopsis of the whole world of Terry P would entertain and slightly redirect their approach to his work……

(So I wrote it on the train with all its inaccuracies)

Welcome to Budapest, I said walking in the door with a leaflet in my hand, “He’s started!” “Wait hang on, we haven’t sat down yet.”

The great city of Budapest was originally two towns; the two towns of Buda and Pest. Buda was very poor and filthy and Pest was filthy rich. Hang on, that’s not right, that’s Ankh Morpork!

Terry stole it off there.

Two towns and they grew and grew till they came towards each other and when they became connected by a bridge they became a huge city.

Long ago that was and new folks come along of all types all the time; if you want to be in the city you build in the city, so folks built on tops of old buildings. There are several layers of buildings sinking away below what you see. Many of those layers far below (shiver) are still lived in.

The city is protected though. It has the Watch. It needs protecting because everything in this world was stolen; stolen by the master storyteller himself. The very Terry who robbed from history, folklore, religion, tourist guides – and they call this comedy.

We are safe though. There is the Watch. The honest one on the Watch is Carrot; the huge strong tall leader of it all these days; he is huge, strong, tall, proper and slowly steady. He could keep the whole city in order on his own.

He is six foot eight and he is a dwarf. They found him when just a babe with just his regal sword by his side and raised him as their own. When he no longer fitted in the cave without a double stoop they felt he ought to venture into the world of those, er, other, er, folk…..

The Watch, yes that was it, the Watch.

There is a lot to be said for the highly untrustworthy Corporal Nobbs. Nobbs. Nobby Nobbs for short; he is short, and ‘technically’ human. You can trust him to find the thieves though, because he is very interested, in a personal way, in the things which they took – he will find them.

The night shift is also the best place for his boss Captain Fred Colon many decades he has been on nights, his wife is on days, any other arrangement would take the romance right out of it.

Commander Vimes, who married the lady of the manor, puts on his old ‘copper’ boots and comes back to help out in a crisis, these old boots have huge holes in the soles which he has lined with cardboard. You can feel the cobbles under your feet and you know just where you are.

He probably got involved when the Kings Head was demolished over night, but it was rebuilt in minutes early in the morning. Soon as Tiffany found out.

Yes, you knew it, it was the little, blue all over guys with nothing but a kilt and a very very bad attitude, (and mouth).

They got in a fight with the landlord and demolished the place.

Yes, Tiffany the girl witch of merely eight or so, “Hag o all hags yer ken,” she knew.

“Ok nay., she’s makin of the folding of the arms, she will be doing the tapping of the foot…..”

They ran back down there and rebuilt the Kings Head in minutes, trouble is they built it backwards. Now everyone has to go in through the back way – so, they don’t call it the Kings Head anymore…

You are safe in the city, well unless you buy a sausage. Cut My Own Throat Dibbler is out there hollering his wares and if you are to buy one of his so-called sausages you will soon begin to understand why the River Ankh is almost possible to walk across.

You would be safer doubling up your expenditure and buying his top of the range product, the rat on a stick – at least you would know what it is.

All stolen, even the disc; if you peer over the edge of this round flat world you may see that it rests on the back of four elephants, they in turn stand upon the back of A’Tuin the giant turtle. A’Tuin is on a galactic mission, flying through space to meet another turtle with a disc on its back – to mate.

The worry is, is A’Tuin a male, because we will probably be all alright then. Or, is A’Tuin a female, in which case when they meet up we are all in trouble.

If you are wanting to get away with things you may wish to choose Blind Io.

There they all are on the mountain above Ankh Morpork which is ruled with an iron fist of subtle manipulation by the Patrician.

Carrot of the Watch should be the ruler, he has the royal sword and the birth mark and just might go about killing a dragon, but if he does everyone will have forgotten by morning.

He does his best against the Thieves Guild. But the gentle Patrician, who is only standing in till the real king is found, has the guild organised. If you are robbed they will take eight per cent of your current monthly income and they will utilise half of this to employ the Assassins Guild to remove from the city any unregistered thieving types.

You are safe here though. Across the gulf of the Ankh is the great bridge, and, looking out forever upon the sea, from this bridge are huge great brass hippopotamus’.

If ever there were to come, it is said, foreign enemy fleets from the seas toward Ankh Morpork the hippopotamus’ would be the on the bridge looking out, they would see the enemy and they will come alive and – promptly run away – this is the nature of this city.

You are safe here, until a dark figure is cast in a role and walks into a dark theatre with a dark mask upon his face and audiences are entranced; when I played him in audition he fell below the casting table and stretched back up with a mask upon his face, “You call this a comedy!”

3 thoughts on “Introduction to the Discworld of Terry Pratchett. What was I doing! My beloved friends ‘We Are Theatre’ invited me to audition and here I am writing Fan Fiction!!!!!!”