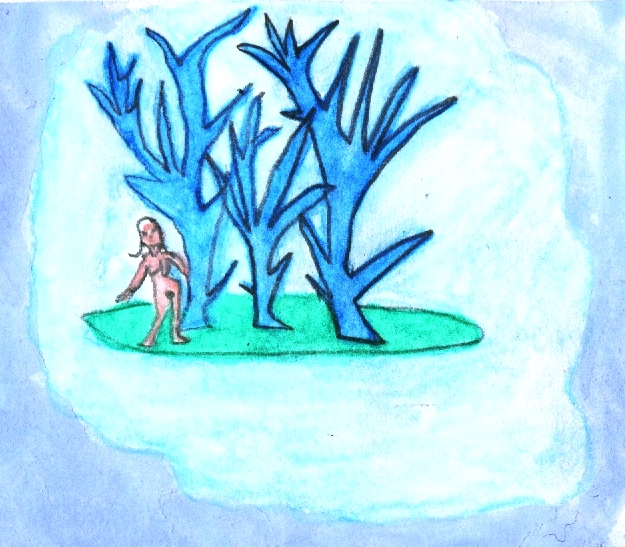 The shape changer god no longer knows what he is. The change of shapes so often, takes away the god-like sense of human-form, until a part of him is monstrous.

Even at his birth, when lightning took away his mother, he had to survive. Laufey had ran away while heavily pregnant, in fear for her life from Cruel Striker, she ran. Deep into the Iron Wood. At the moment of Loki’s birth-  lightning struck and Loki was alone. He had to change.

What monster in a god’s form entered Asgard?

He was embraced as blood-brother. Here he could be equal, and, he loved; his beloved wife and children, to them he was fair and loyal and true.

Yet he felt the call to share his love, to fly away – He went with Giant-woman Angrboda. Went with her often. They had children.

If ‘children’ is what they were. A snake. A wolf. A half dead daughter. Their wildness, their corruption, the danger of them spread as word to gods. They must be stopped.

Now. Jormungand the Midgardyrm is cast into the sea, to grow and fume and wait.

The wolf they could not kill, they tricked it: tied it down to howl and wail and strain with magic dwarven ribbons holding him.

The daughter; blackened half, commandingly beautiful in half; she was cast to the very deep.“Become the queen of all the death, the cowardly dead, the trickster dead, the oath breaker. – Keep them, keep them.” So hollered High-seat god of all the worlds.

How Loki fumed. It turned his heart. They were not monstrous to him. They were his monsters. They were his offspring. See ahead how bitter are his deeds because of this. “My children! My monsters! My offspring!”

Join 273 other followers
Follow Adrian Spendlow The Blog on WordPress.com