My Seven Favourite books of all time

My friend Olivia challenged me to post a book a day on Facebook and what have I done? Posted them on WordPress.

I’ve failed again. She said I had to post one a day. I’ve done them all at once.

She said I had to pick seven. I’ve picked nine.

I am failing badly.

She said books. I chose a comic book (series).

Fails all the way.

I am supposed to nominate one person a day to keep the thing going. I have published them all at once.

Help me I failed.

You will have to nominate yourself. or share it to others. We have to keep this thing going. It is imperative to the continued growth of humanity. Share and nominate.

First off is the big cheat a comic book. Tin Tin, any Tin Tin.

I think my favourite must be this one; The Clan of the Cave Bear. I must have read the Earth Children’s series several times, so that makes it my favourite I guess.

The recording below might be considered a chapter spoiler, but it is also a really good bit. I’ve tried to leave it as a cliff hanger.

The Gap series is intriguing. No one in it is perfect. In fact just about everyone in it is horrid, but there will be a time when each one will have you cheering for them.

Kevin J Anderson is pretty good too. My son Luke says there are more deaths than in the Game of Thrones. 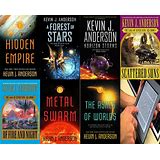 Luke tells me there is a follow up trilogy; The Saga of Shadows.

I needn’t write anything about this next one. My recordings tell it all.

I could just say read anything by Terry Pratchett. No, read everything by him. I will say that if you haven’t read anything by the late great storyteller, keep at it. People often say they found one hard to get into. I don’t see it myself, but folks say that. Think it’s all the characters in the Disc World books. Here is a real departure in Nation. Totally different to all  his other books. Mind you I will be introducing the Long Earth series a bit later down, and they are totally different to any book ever written, ever.

It is not sci fi or fantasy but it is set in slightly alternative reality where history happened a bit different.

Here is my storytellers bible. Well, for Norse stuff anyway. I get all my knowledge of the Norse belief system through this guy.

If I was going to read Pratchett, this is where I would start…